If it isn't one Jihad, it's another 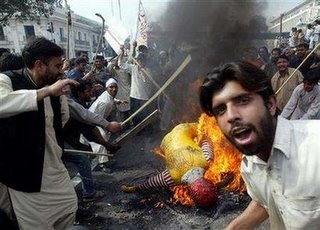 From the LA Times:

But no more. This is one relationship that's ending in part because of the children.

Disney is not renewing its cross-promotional pact with the fast-food giant, ending the arrangement with this summer's release of "Cars" and "Pirates of the Caribbean: Dead Man's Chest." One reason, say multiple high-ranking sources within Disney, is that the company — which prides itself on being family friendly — wants to distance itself from fast food and its links to the epidemic of childhood obesity.

Posted by Yitzchak Goodman at 11:01 PM