Press TV (Iran): "Whose side is Al-Jazeera on?" 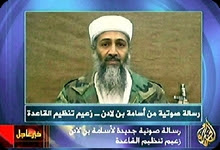 The pot calls the kettle a son of pigs and monkeys?

In a bid to undermine Iran's positive role in Iraq, Al-Jazeera TV network has made efforts to downplay the importance of the US-Iran talks, which can guarantee security in Iraq.

While the Iraqi government has described the second round of the talks as a big achievement for the Iraqi nation, the Al-Jazeera TV website tends to question Iran's positive role in the region by posting an article headlined "US and Iran clash at Iraq talks".

Al-Jazeera's attempt comes at a time when Iran, Iraq and the US have agreed on a new initiative to stymie the violence in Iraq while security experts from the three countries are slated to form a tripartite committee to support the Iraqi government.

Pundits did not expect such an early constructive result from the talks.

And still don't expect any kind of "constructive result" at all.

The Iranian Ambassador to Iraq, Hassan Kazemi-Qomi, who headed the Iranian delegation, said that all sides had expressed their readiness to support the Iraqi government led by Prime Minister Nuri al-Maliki and pledged to use their influence and clout to achieve this aim. Commenting on the results of the meeting, Qomi said, "If the talks make the US correct its policies in Iraq, it could be considered as a step forward."

Iraq's Foreign Minister Hoshyar Zebari meanwhile said in a statement released on Tuesday, "This meeting has been challenging but productive and we feel it has produced some real results". He said the tripartite committee's objectives are "to battle al-Qaeda insurgents and support general stability in the country".

The Iraqi government spokesman, Ali al-Dabbagh who described the talks as a big achievement for the Iraqi nation, said in an interview with al-Alam TV channel that the second round of trilateral talks was quite 'successful'. The Iraqi Deputy Prime Minister Bahram Salih also supported Iran-US agreements saying the talks would benefit the Iraqi nation, its neighbors and the US.

The US Ambassador to Iraq, Ryan Crocker who headed the US delegation, also commented on the meeting saying, "We made the point that the agreement on principle is important and the principle that both Iran and the United States support is a democratic, stable Iraq."

He also said, "No people have suffered greater harm under Saddam Hussein than the Iraqis themselves, but second only to the Iraqis are the Iranians. The vicious eight-year-war that Saddam launched against them has to be something that no Iranian will ever forget."

Al-Jazeera has always tried to suggest that the Iran-US talks will be of no benefit to Iraq, but the question that remains is: apart from serving as a platform to broadcast footage of terrorist organizations, what does Al-Jazeera do in order to help the situation in Iraq?

Why does Al-Jazeera fuel sectarian and religious violence in Iraq and elsewhere in the region and try to undermine the efforts geared to improve security in Iraq? When all sides except the extremists seem satisfied and hope to defuse the crisis in Iraq, why is Al-Jazeera so angry about the trilateral negotiations?

Whose side is Al-Jazeera on?

They are subtly hinting at the answer with the image reproduced above.