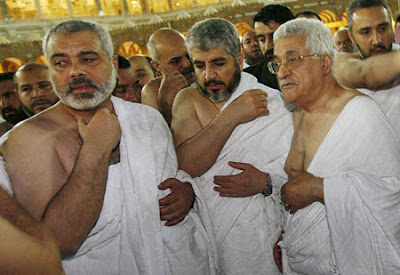 From Daily Kos--Where else? The title is "A Rabbi in the Mosque":

[...] In a subsequent dinner with the leaders of the mosque and the Imam I heard many stories of frustration as they described to me various interfaith activities with the Jewish community in which they had participated, only to find that the friendly atmosphere closed down totally when they tried to get Jewish community leaders or lay people to acknowledge the suffering of the Palestinian people. Several of the participants in this discussion were Palestinians themselves, others were from Syria, Lebanon, Jordan and Egypt. They told me that they truly hoped that inviting me to speak would be a first step toward creating a deeper kind of dialogue that was open to hearing and acknowledging the pain of the Palestinian people (for example around the collective punishment currently being inflicted on the entire population of Gaza in response to the vicious and unjustified violence of a handful of unknown people who are bombing Sderot . . .

I did a Google search on "Sderot claims responsibility"

Here are the entities mentioned in the various items that come up in the first page of results:

Update: Hamas just took responsibility for Tuesday's qassam attack on Sderot. Hamas is led by two of the robed gentlemen pictured above.