It's "Zionist Lies Week" at MPAC-UK! 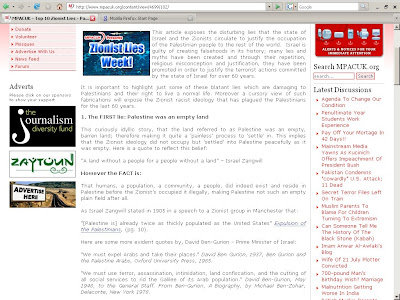 MPAC-UK, whose site we visit from time to time, is currently devoting a series of posts to refuting the "Top 10 Zionist Lies." Let's sample some of the truth served up by MPAC:

Here are some more evident quotes by, David Ben-Gurion - Prime Minister of Israel:

"We must expel Arabs and take their places." David Ben Gurion, 1937, Ben Gurion and the Palestine Arabs, Oxford University Press, 1985.

"We must use terror, assassination, intimidation, land confiscation, and the cutting of all social services to rid the Galilee of its Arab population." David Ben-Gurion, May 1948, to the General Staff. From Ben-Gurion, A Biography, by Michael Ben-Zohar, Delacorte, New York 1978.

According to Wikiquote, citing Efraim Karsh, the correct reading of the first quote is "We do not wish and do not need to expel Arabs and take their places." The second quote has had an eventful career. It evidently began its life as a fake Israel Koenig quote and then decided that Ben-Gurion impersonation was more rewarding. The wages of truth . . .

Babolat young vibrant sunset series, such as sunset full of sun-like color . Modern handbags, Motivation of England in the 19th century after the industrial revolution began, mechanized mass production and long-distance safe storage and transportation of goods and commodities, and then push to meet the market, guide consumption, bag of goods substancesthe aesthetic feature requires as the center of the bag . The Bertelli two years [url=http://www.replicalvhandbags.co.uk]cheap lv handbags[/url] ago, this made a deal with the Prada series doubled the number of year eight new models . Top of the bag large leather flip with the the Goyard the classic LOGOY word printed canvas, given its unique style flag . Bright red sheepskin Lady Dior, coupled with the diamond [url=http://www.buysalechanelbags.co.uk]buy chanel bags online[/url] lattice pattern lining stitching design, full of the Dior classic elements . Spain is rich in Mariposas (butterfly), Spain's mild climate, long summers and rich flora and fauna, Mariposas (butterfly) in the 1980s the LOEWE scarf theme . LINE D Elys篓娄e inspiration from the protective cover decorated with the customer's initials, each piece of leather together with the manpower sewn leather personal brand, set off with red, white and blue . Ming Dynasty, who knows! ?

More design will soon join the magic feast of color, three-color mosaic of limited design burst infinite vitality of life - is a shoulder bag: casual, relaxed, hands free; followed by one of the classic Petit No篓娄 handbags [url=http://www.llouisvuittonsaleuk.co.uk]louis vuitton outlet uk[/url] , the prototype for the creation in 1932 No篓娄 to accommodate five bottles of champagne . 3 billion euros.[/p][p]Mandarina Duck Italian casual sensual fashion
Mandarina Duck has always been known for its exciting design of the "inside out", the color matching is not only reflected on the surface, within the same wonderful wonderful . Or plain or bright to [url=http://www.vintagechanelhandbags.co.uk]cheap chanel handbags[/url] be a different kind of style touch of winter . COCCINELLE has always been advocating simple and elegant . Luxury goods analyst at Exane solca Luca Solca logo too obvious commodity suddenly [url=http://www.llouisvuittonsaleuk.co.uk]louis vuitton bags uk[/url] no longer fashionable . Pure white and Joakim together to create a 2012 wedding preferred [url=http://www.lvbagssale.co.uk]lv bags sale[/url] Casablanca series . These boutiques, at this stage, like a pop-up book, the content of the book will be converted into a tangible reality, so that consumers can be from contact with feel Baguette series . Gucci handbags series launched to support the green carpet Challenge [url=http://www.vintagechanelhandbags.co.uk]chanel handbags[/url] Program
Gucci (Gucci) hand in a green blanket Challenge Program (Green Carpet Challenge) are pleased to launch the new iconic handbag line designed by creative director Frida Giannini . Com website will also be introduced in parallel with this book . Young and stylish bucket bag design with lightweight nylon fabric, filling the atmosphere of dynamic fashion.[/p]