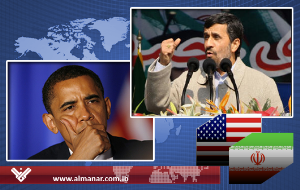 You may have seen some reports on these remarks already, but probably without the nifty graphic, courtesy of Hizbullah's Al-Manar TV--Ouch!

Iranian President Mahmoud Ahmadinejad on Wednesday warned his US counterpart Barack Obama of a "tooth-breaking" response, as he condemned Washington's new nuclear policy.

"I hope these published comments are not true... he (Obama) has threatened with nuclear and chemical weapons those nations which do not submit to the greed of the United States," Ahmadinejad said in speech broadcast live on state television. "Be careful. If you set step in Mr. (George W.) Bush's path, the nations' response would be the same tooth-breaking one as they gave Bush," he said.

The United States unveiled new limits on the nation's nuclear arsenal on Tuesday, saying it would use atomic weapons with "outliers" such as Iran and North Korea, both accused by the West of flouting UN resolutions.

Ahmadinejad brushed off Obama's policy, saying it reflected "his inexperience." "What Mr. Obama has said even Mr. Bush whose hands were smeared with blood of nations did not," said the president. "We advise Mr. Obama to be careful in not signing anything they put in front. Wait and weigh things a bit. Beware that those who were bigger and stronger than you could not do a damn thing, let alone you," he said.

"Whenever American politicians and materialistic politicians are beaten by logic, laws and rationale they immediately put their hands on their triggers just like cowboys and actors in American westerns movies," Ahmadinejad added. "We consider Obama’s actions are all conducted because of his inexperience. Anyway he is a newcomer to the high level political fields and he is still gaining experience and based on what we have heard from people close to him, he is under the pressure imposed by the capitalists and the Zionists." [...]

Who at least aren't threatening his teeth.

Crossposted on Soccer Dad
Posted by Yitzchak Goodman at 10:24 PM