The Elders put in an appearance at IRIB Radio 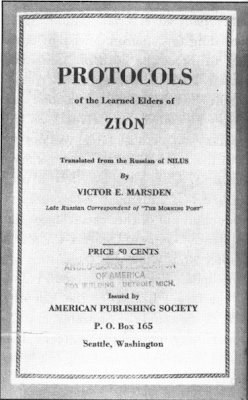 IRIB, in case you didn't know, stands for "Islamic Republic of Iran Broadcasting." I have been noting Holocaust-denial and general conspiracist looniness in the English offerings of the Iranian Press and in the utterances of Iran's major officials recorded therein for some time, but I don't see explicit references to the Protocols that often. Some things, however, are inevitable:

[...] But the question here is how these elements have succeeded in brainwashing the people of the world to portray themselves as oppressed, in addition to such other disputed claims as being intelligent and hardworking geniuses. The answer is obvious. This is all part of an elaborate and intricate plot, planned for years in order to achieve this nefarious goal. The Zionists have concluded that the most successful tool by which they can change of the mentality of people about them is to dominate the world news media and to infiltrate them.

As was mentioned before, the first Zionist Congress led by Theodore Herzl was held in 1896 in Switzerland where all members agreed on planting an artificial entity called Israel in the heart of the Muslim world in Palestine, by first controlling world news agencies, especially the press and newspapers. Today we can find few newspapers or magazines in the world in which the Zionists do not have control. When we talk about British newspapers, "The Times" emerges as the one of Britain's most famous dailies. The daily was first published in 1788, but its control soon passed on to a wealthy British Jew. Thus, the daily turned into a pure Zionist organ. When the daily got entangled in a financial crisis and was even closed for some time, it was purchased by Rupert Murdoch an Australian Jew. He could pay for the compensation and debts of the daily to the tune of 45 million dollars and thus the Zionists' greed was achieved. The Britons were lucky and cheerful of the deal and admired this Jew who had bought it. But they did not know that purchasing The Times and consequently its weekly sister publication the "Sunday Times" by Murdoch would be followed by the Zionist domination and control of the Britain's "the Fleet Street", the centre of the country's media.

In this regard, it is interesting to note what the protocols of the Zionist Elders had planned a century ago. The protocol on the press and media reads:

"The other great power is the press. By ceaselessly repeating certain ideas, the press in the end makes them considered as truths. The theatre renders similar services, everywhere theatre and press follow our directives. By an indefatigable campaign in favour of the so-called Democratic form of government, we will divide the Gentiles amongst themselves in political parties, we shall thus destroy the unity of their nations, we will sow the seeds of discord. Powerless, they will have to accept the law of our bank, always united, always devoted to our cause." [...]

The "so-called Democratic form of government," "political parties"--all our doing? Ah, of course! How could there be any doubt?

Crossposted on Soccer Dad
Posted by Yitzchak Goodman at 5:55 PM