Ahmadinejad: "the Zionist regime's main mission is to destroy the genuine cultures of nations" 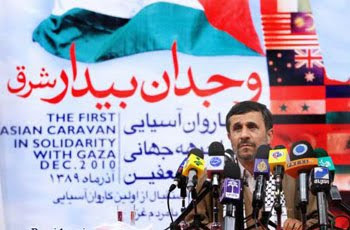 Nazoid drool is what every humanitarian activist wants to hear:

President Mahmoud Ahmadinejad said that the arrogant powers established the Zionist regime to extend domination over the Middle East and the world.

Addressing a ceremony to welcome the Asian Gaza Convoy, he further noted that settling the issue of Palestine and expelling the Zionist regime from the occupied lands is a universal and humane issue.

'Palestine fully reflects the situation facing the world,' he said.

Ahmadinejad also added that humiliation of humanity and depriving them of their basic rights are among the crimes committed by the Zionist regime.

Today all know that the Zionists are not Jews; rather they do not follow any divine religion, he said.

Ahmadinejad also said that the Zionist regime's main mission is to destroy the genuine cultures of nations. [...]

The Iran part of the project is going swimmingly.
Posted by Yitzchak Goodman at 9:36 PM