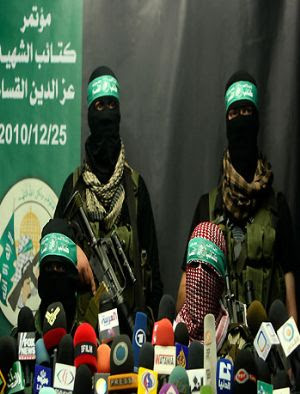 The Asharq Alawsat caption for this photo is "Members of Al-Qassam brigades, the armed wing of the Hamas movement, take part in a news conference in Gaza City December 25, 2010."

The Fars headline does a good job of boiling the story down to its essence. Hamas, you will recall, beat Fatah in the most recent Palestinian election.

A senior leader of the Palestinian Islamic Resistance Movement, Hamas, warned the Zionist regime to give up imaginations about triumph over Palestinian resistance, stressing that dying or leaving the Palestinian territories are the only two options that Zionists have.

"As long as Zionists occupy Palestinian territories, they have no other option but dying or leaving Palestine," Head of the military wing of Hamas Ahmad Jaberi said on Saturday.

Jaberi also reiterated that the Ezzedeen Al-Qassam Brigades, the military wing of Hamas, has kept all options on the table in the war against the Zionist regime, and has always made its best efforts to activate resistance, release captives from Israeli jails and annihilate the criminal and usurper Zionist regime.

Stressing that resistance is not limited to the Gaza region, he said that the plan of resistance belongs to all the occupied Palestinian territories.

Earlier this month, the Ezzedeen Al-Qassam Brigades in a statement had also underlined resistance against the Zionist regime until complete freedom of the Palestinian territories from Israeli occupation.

In a statement issued on the occasion of the 23rd anniversary of the establishment of the Islamic Resistance Movement (Hamas), the group underscored that resistance is a reaction to occupation, meaning that the Zionist regime merely understands the language of force and that it is stopped only by resistance. [...]

Israel should get on with winning the conflict.
Posted by Yitzchak Goodman at 7:11 PM