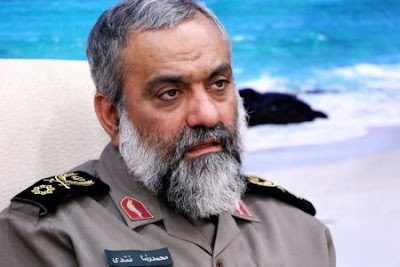 The Iranian press produces a constant stream of headlines which begin with the words "Iran ready." For instance, "Iran ready to help Lebanon explore oil in Mediterranean Sea" and "Iran Ready to Send Dentists to Regional Countries." They are usually silly, but this is the best one in a long time. Notice that the Medium-sized Satan's crimes include "the fall of the Ottoman Empire":

Commander of Iran's Basij Force says it is ready to deploy peacekeeper forces in London as the unrest in the British capital drags on despite tightened security measures.

Naqdi criticized the British authorities for their harsh crackdown of protesters and describing them as rioters and hooligans.

“Unfortunately the crimes and violence of the autocratic British kingdom continues against the country's deprived [population] and not only the advice of well-wishers has no effect on the conduct of the regime's repressive police force but we witness the deprived people of this country are being called a bunch of thieves and looters,” he regretted.

“If the UN General Assembly approves, the Basij Organization is ready to send a number of Ashura and al-Zahra brigades to Liverpool and Birmingham as peacekeepers to monitor observation of human rights laws and deter use of force,” he added.

Naqdi referred to UK Prince Williams' lavish wedding and the high cost of its live coverage and described the recent uprisings in Britain as the result of “big mistakes” by British officials and warned them of even more severe consequences.

“This is the beginning if the road and the UK regime has to pay the price for the massacres in Africa, wars and bloodshed in the Indian peninsula, crimes in China, the fall of the Ottoman Empire and bloody conflicts among Muslims and followers of other faiths,” the brigadier noted.

He said the uprising in Britain even if oppressed at this stage is far deeper than a political unrest or factional conflict to be resolved easily.

“This wound will come to a head elsewhere…The people of Britain have awakened and will definitely take their rights back,” he stated. [...]

A related story begins "A political analyst says the British government should accept Iran's offer to send a group of rapporteurs to investigate human rights violations in Britain." There's a new age dawning . . .
Posted by Yitzchak Goodman at 8:41 AM