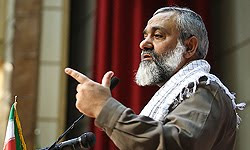 I wonder who is happier: Iran or the Mondoweiss crowd or Angry Arab?

Commander of Iran's Basij (volunteer) force Brigadier General Mohammad Reza Naqdi lauded the Egyptian people for their attack on the Israeli embassy in Cairo, and said the move resembles a similar raid by a number of Iranian students on the US embassy in Tehran in the early days after Iran's 1979 Islamic Revolution.

"This exceptional movement of the people in Cairo was inspired by Aban 13 (November 4) epic (the takeover of the former US embassy in Tehran in 1979) and is a reminder of the revolutionary zeal of the Islamic Iran's students who courageously squashed the empty awe of the world arrogance," Naqdi said on Saturday.

November 4 marks three important events in Iranian history: the takeover of the former US embassy in Tehran by Muslim students following the Imam's line in 1979 and the exile of the late Founder of the Islamic Republic Imam Khomeini by the Shah in 1964.

Since the 1979 takeover of the US embassy in Tehran, Iranians have been celebrating the occasion every year by holding rallies on the anniversary and marking it as the National Day against the 'Global Arrogance'.

Naqdi expressed pleasure with the Egyptian people's demonstrations which forced the Israeli ambassador to leave the country, and warned the Zionists that in case they return to Cairo, even the steel walls of their complex will not be able to resist and protect them from the wrath of the Egyptian people.

The Israeli ambassador to Egypt flew out of Cairo, a few hours after demonstrators stormed the Israeli embassy.

Yitzhak Levanon boarded a plane before dawn on Saturday mohttp://www.blogger.com/img/blank.gifrning.

Egyptian protesters stormed the embassy on Friday, destroying a part of a barricade wall around the building in the process.

One person died due to asphyxiation after inhaling tear gas, and about 450 demonstrators were injured, medical personnel said. [...]

Current sources are saying more than a thousand were injured.
Posted by Yitzchak Goodman at 8:39 PM