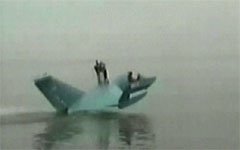 From Islamic Republic of Iran Broadcasting:

The futuristic boat was tested during an ongoing massive wargame which Iran has launched in the Persian Gulf waters since Friday.

I wonder how the concept of a "flyer boat" differs from that of a "seaplane." Didn't they have those in WWI?

The military boat was designed by the Islamic Revolution Guards Corps which along with Iran's Army Naval forces and Basij organization forces are holding the marine wargame.

The high-speed boat which has a rare maneuvering power is capable of missions everywhere in the Persian Gulf and the Sea of Oman, the scope of the massive wargame.

The radar-evading flyer has such a design that it capably embarks on different missile firing with a highly accurate aiming, even on move.

The Islamic Revolutionary Linguistic Guards have also developed a new form of English.

The domestically-built boat possessed by few countries has been made by experts of Iran's Ministry of Defence.

From Al-Jazeera on the same topic:

The US has expressed concern at the military exercises, but believes that Tehran is likely to be exaggerating its weapons capabilities.

Posted by Yitzchak Goodman at 5:14 PM