"Song 'Ode to the Motherland' Created in DPRK"

I wonder who did the creating. One person? A committee?

A song "Ode to the Motherland" was recently created in the Democratic People's Republic of Korea as a national treasure.

The song, vibrant with feelings of ardent love for the motherland, reminds one of the tireless efforts devoted by President Kim Il Sung and general secretary Kim Jong Il for the prosperity of the country and the wellbeing of its people.

It also reflects the steadfast will of the Korean people to glorify the socialist motherland, built and developed by the President and the leader.

Lyric and melodic, the song is a favorite for everyone.

In the 1st stanza, the song says that one can enjoy a worthwhile life only under the care of the motherland.

In the 2nd and 3rd stanzas, it speaks highly of the DPRK where everything serves for the popular masses.

In the 4th and 5th stanzas, it calls for devoting one's all to the prosperity of the country led by Marshal Kim Jong Un.

Inspired by the song, the DPRK people have turned out in the efforts for the prosperity of the country with their strong will to further glorify the history of Kim Il Sung's nation and Kim Jong Il's Korea.

Posted by Yitzchak Goodman at 9:15 AM 2 comments:

Here is "Yom Kippur in a Nutshell" from chabad.org:


Yom Kippur is the holiest day of the year--the day on which we are closest to G‑d and to the quintessence  of our own souls. It is the Day of Atonement -- "For on this day He will forgive you, to purify you, that you be cleansed from all your sins before G‑d" (Leviticus 16:30).

For twenty-six hours--from several minutes before sunset on Tishrei 9 to after nightfall on Tishrei 10--we "afflict our souls": we abstain from food and drink, do not wash or anoint our bodies, do not wear leather shoes, and abstain from marital relations.

Before Yom Kippur we perform the Kaparot atonement service; we request and receive honey cake, in acknowledgement that we are all recipients in G-d's world and in prayerful hope for a sweet and abundant year; eat a festive meal, immerse in a mikvah, and give extra charity. Late afternoon we eat the pre-fast meal, following which we bless our children, light a memorial candle as well as the holiday candles, and go to the synagogue for Kol Nidrei services.

The day is the most solemn of the year, yet an undertone of joy suffuses it: a joy that revels in the spirituality of the day and expresses the confidence that G-d will accept our repentance, forgive our sins, and seal our verdict for a year of life, health and happiness. When the closing Ne'illah service climaxes in the resounding cries of "Hear O Israel... G-d is one" and a single blast of the shofar, followed by the proclamation, "Next year in Jerusalem." Then joy erupts in song and dance (a Chabad custom is to sing the lively "Napoleon's March"), followed by the festive after-fast meal, making the evening after Yom Kippur a Yom Tov (festival) in its own right.

Posted by Yitzchak Goodman at 10:49 AM No comments:

Life is good for dictators these days:

I extend warm congratulations and greetings to you on your 48th birthday.

The Korean people send invariable support and solidarity to the Syrian government and people in their just struggle to defend the sovereignty and security of the country.

I sincerely hope that you will always keep yourself in good health to achieve fresh success in your responsible work, convinced that the long-standing bilateral relations of friendship and cooperation will grow stronger in future.

Posted by Yitzchak Goodman at 10:10 PM No comments: 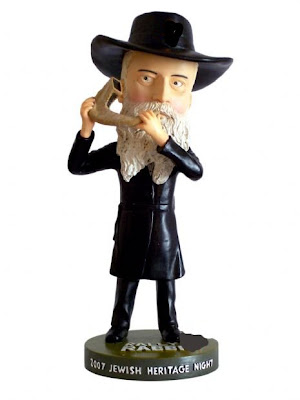 What is this Rosh Hashanah business anyway?


May you be sealed and inscribed for a good and sweet year.
Posted by Yitzchak Goodman at 8:37 AM 1 comment:

The "last instruction of Kim Jong Il" was "to breed lots of tasty and nutritious sturgeon and send them to Okryu Restaurant"? Wow, and you thought this was going to be the usual, run-of-the-mill "Dear Leader gives field guidance to lemonade stand" article, didn't you?

Kim Jong Un first looked round the monument to the field guidance given by leader Kim Jong Il standing in the compound of the station.

He learned about how the station has implemented the instructions given by the leader, recalling that he gave an instruction on breeding in sea water sturgeon, etc. living in fresh water after acclimatizing them to it, having an insight into the fact that if some freshwater fishes live in sea, they look nice in color and become tastier.

At indoor pond No.1 he asked from where sturgeon fries the station gets and what is production cycle and quantity and to which units they are supplied.

It is the last instruction of Kim Jong Il to breed lots of tasty and nutritious sturgeon and send them to Okryu Restaurant, he said, urging the station to thoroughly implement Kim Jong Il's instruction.

He was satisfied to learn that the station cut down by half the production cycle as compared with other countries by studying and rounding off sea cucumber culture method of Korean style.

After going round the station, he gave precious instructions which would serve as guidelines for improving and strengthening its business activities.

To make people get real benefits is as important as building the breeding station into a modern one and registering successes in fish culture and research into fish breeding, he noted, underscoring the need to properly choose the units to be provided with fishes on the basis of calculation of the production, arrange well aquatic products supplying bases having restaurants and shops in Pyongyang and put their operation on a normal footing.

He noted that if the issue of fish food urgently needed for fish culture is to be solved and business activities are to prove profitable, it is necessary to mass-produce high quality fishes including sturgeon and export them to foreign markets.

He called for scrupulously organizing the work for successfully producing processed caviar recognized as high quality food worldwide, in particular, to get profits.

In the coming year, I hope you, too, will be "scrupulously organizing the work . . . in particular, to get profits." Kesiva vechasima tova!
Posted by Yitzchak Goodman at 9:55 PM 1 comment: