Iran: Israel out to "derail" hope and change

What else can they do after the great Hamas victory in Gaza?

Iran’s Majlis Speaker Ali Larijani says a new Middle East peace plan that is going to be presented by President Barack Obama in future days "is probably a deceptive initiative" proposed by Israel itself in order to derail the 'change' slogan sought by the U.S. administration.

On recent remarks by new Israeli Prime Minister Benjamin Netanyahu that Tel Aviv and Arab states have agreed to put pressure on Iran for its nuclear program, Larijani said, "Such statements are not unprecedented and we must view these remarks with regard to the past events."

It is not surprising that the Tel Aviv regime seeks to "find supremacy over the region and Islamic countries" to recuperate from the humiliating defeats it suffered during the recent 22-day war in the Gaza and 33-day war on Lebanon in 2006, Larijani added.

Elsewhere in the Iranian Press, a Hamas spokesman insists that "'Israel' recognition" is "not for discussion":

Spokesman of Gaza-based Palestinain government, Hamas said on Saturday that it will not discuss the recognition of 'Israel' with Fatah party during reconciliation talks in Cairo.

"We can discuss with Fatah all the options... which do not contradict our national goals and the rights of our people, except the American card which stresses recognition of the Zionist entity and the conditions of the Quartet," Fawzi Barhum said in Gaza.

"This is not open for discussion."

Gotta restart that peace process. IRIB also reports that Lebanon has arrested a "Mossad spy." The story is accompanied by this picture: 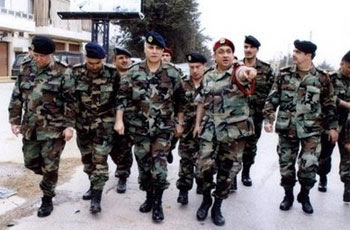 The idea, I guess, is that the pointing soldier is saying "Look, there's a Mossad spy!"

Crossposted on Soccer Dad
Posted by Yitzchak Goodman at 9:20 PM