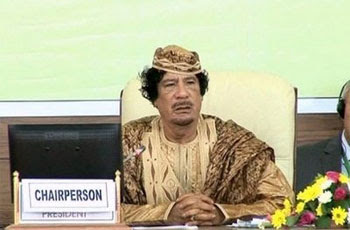 Here at World Zionist Conspiracy Headquarters we are very gratified at this authoritative testimony to the great work done by our African division:

'Israel' is "behind all of Africa's conflicts," Kadhafi told some 30 African leaders gathered at Tripoli airport for a summit focused on solving the continent's trouble spots, including Sudan's Darfur and Somalia.

Earlier Kadhafi demanded the closure of all Israeli embassies across Africa, describing Israel as a gang and saying it uses "the protection of minorities as an excuse to launch conflicts."

He said that a Darfur rebel group had opened an office in Tel Aviv while its leader lives under French protection, a reference to Sudan Liberation Army chief Abdelwahid Mohammed Nur who lives in exile in Paris.

"As African brothers we must find solutions to stop the superpowers who are pillaging our continent," he said.

Gaddafi said all sorts of other things at this summit. At JANA, Gaddafi's own news agency, these remarks are covered in an article called "Chaired By Leader of the Revolution, Chairman of the African Union Proceedings of the AU Summit for Resolution of Conflicts in Africa Kicks Off in Tripoli...13th Addendum." I guess the remarks covered by the first 12 addenda just weren't as deeply meaningful to the folks at IRIB as the ones on Israel. Fars also has an article of Iranian-African interest: "Central African President Felicitates Ahmadinejad on Reelection":

President of the Republic of Central Africa Francois Bozize congratulated his Iranian counterpart Mahmoud Ahmadinejad on his reelection for a second term.

"The Iranian people expressed their total confidence in you by their brilliant choice and I am confident that the friendly relations and cooperation between the two countries will further develop in accordance with the two nations' interests," Bozize said in his message. [...]

The bit about the "brilliant choice" just made those two paragraphs so worthwhile for me. Meanwhile, at PressTV we learn about other places reached by Zionist tentacles: "Sarkozy, Merkel under Israeli influence: Iran":

Iran says remarks made by the French and German leaders on Iran's nuclear issue show the influence of Israel's 'aggressive' stance on Paris and Berlin.

French President Nicolas Sarkozy and German Chancellor Angela Merkel repeated their calls for tougher sanctions against Iran in a Monday meeting in Berlin.

"We are sorry to see their [Merkel and Sarkozy's] remarks [on Iran's nuclear program], instead of being based on legal grounds, they [the remarks] show how under the influence of the aggressive policies of the Zionist leaders they are," Iranian Foreign Ministry spokesman Hassan Qashqavi said on Tuesday. [...]

Crossposted on Soccer Dad
Posted by Yitzchak Goodman at 8:39 AM