"Saudi Arabia police reported that they had seized nearly 1,500 Chinese-made toy guns at a local market which made insulting anti-Islam sounds" 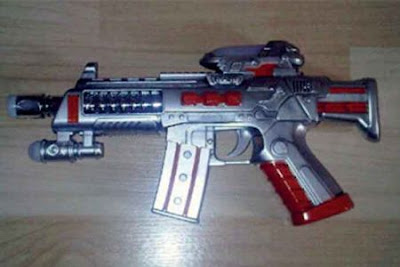 Whenever there's news, Iran's PressTV is on it!

UAE Police say a number of Chinese-made toy guns have been imported into country that utter insulting and mocking phrases against Islam.

Maryam Al Ahmadi, an Emirati citizen and a social affairs activist, found the toys in the local markets and informed the Abu Dhabi police, Emirate 24/7 reported on Wednesday.

“I call upon the police and other competent authorities to investigate how these anti-Islam guns have found their way into the UAE market and to take action against all those who have imported them,” Al Ahmadi said.

Earlier this week, Saudi Arabia police reported that they had seized nearly 1,500 Chinese-made toy guns at a local market which made insulting anti-Islam sounds.

According to UAE law, importers of such toys could face jail terms of up to 5 years.

According to the insulting imported toy law?
Posted by Yitzchak Goodman at 8:37 PM