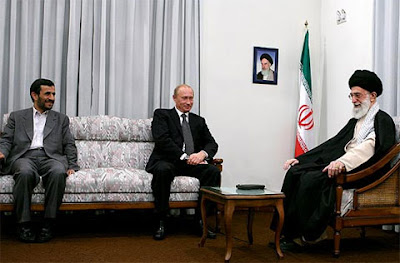 The apex of Putin's "historic visit":

"The real power of a country depends on the dignity and internal power of that nation and the history is a lesson in this regard," Leader told Putin who was in Tehran for the Caspian Sea summit.

For his part, the Russian president said he was happy for visiting Tehran.

"The Tehran-Moscow ties will expand without any limitation and we hope that this visit will open a new chapter in the two countries’ relations," Putin stated.

Referring to his talks with President Mahmud Ahmadinejad on energy, transportation, and aerospace cooperation between the two countries, the Russian leader added, "The interest of Russian nation lies in a powerful and influential Iran in international scene and we have no doubt we will move in this direction."[...]

Want the same story in even more awkward English?

IRIB: "Iranians have a fine image from Russians in mind":

[...] The Islamic Revolution Leader told Putin that the authentic source of power for any country lies in the intrinsic strength of its nation, adding that the Iranian nation and the Islamic Republic have opted for perseverance in defending its national interests because it is confident the enemy transgression will never be quenched.

"On the same ground, the Iranian nation and government will keep the aware and powerful logic and at the same time will avoid adventurism or leaving any excuse to the enemy," Ayatollah Khamenei said.

The IR Leader then praised the Russian nation for their persevering mood in many historical occasions.

"We have a bright and fine image from the Russian nation in our mind which originates from the prudent resistance it has shown in different junctures," Ayatollah Khamenei appreciated.

Ayatollah Khamenei then proscribed US transgressive and excuse-seeking mood. "Americans keep dissent towards any country or government which stands up to their illegitimate interests or acts independent from the country. However, the nations could not be put down by such transgressions," Ayatollah Khamenei observed.

The IR Leader recalled the incessant US intimidation over the years after the Islamic Revolution was triumphed in Iran, noting however that the country has always harvested an otherwise reverse outcome.[...]

We have agricultural subsidies for that sort of thing.

Americans maintain dissent toward any kind of nation or authorities which in turn holds up for their unlawful interests or even works self-sufficient in the nation. Nonetheless, the nations couldn't be placed along by this sort of transgressions
cheapest rs gold
FFXIV Gil For Sale