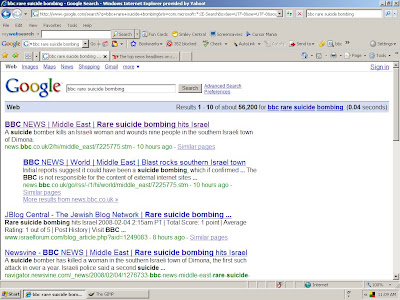 Israel was hit by series of suicide bombings in the 1990s and 2000s, peaking after the Palestinian intifada or uprising broke out in 2000.

However, there were only two such attacks between April 2006 and now, the last being in January 2007 when a bomber blew himself up in a bakery in Eilat, killing three people.

No mention, of course, of thwarted attacks. According to Jewish Virtual Library 187 suicide attacks were thwarted in 2006. This story from 10/7/07 mentions 7 suicide bombings thwarted in "the last month and a half." Our BBC article ends with barely-disguised editorializing about Israel's obviously unjustified measures to prevent those "rare" attacks:

Israel argues that restrictions it imposes on about four million Palestinians in Gaza and large parts of the occupied West Bank are crucial in preventing such attacks, though the blockades have been condemned as "collective punishment" by the UN.

Hamas used the term "glorious" to describe the attacks.

Update: They have already deleted the word "rare" from the title.

Update: Someone else is critical of the BBC.