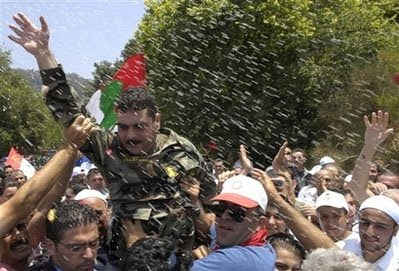 Kuntar's release is still fresh news in Iran. I omitted some paragraphs in which he denies his crimes. From Islamic Republic of Iran Broadcasting:

Five days after his release from an Israeli jail as part of a swap between the Zionist regime and the Lebanese Islamic Resistance Movement, Hezbollah, Samir Kantar is more determined to become a member of the Islamic resistance in Lebanon.

"What I want now is to become a struggler in the Lebanese Islamic Resistance," Kantar said in an interview with Deutsche Presse-Agentur DPA.

Surrounded by his family members, including nieces and nephews, Kantar said, "Two things brought me happiness in the past few days: one is my release from the Zionist jail and the other is the gift I received from Hezbollah, which is the machine gun of the resistance," he said proudly at his family home in the Druze town of Abey, 35 kilometres southeast of Beirut.

Kantar, who turned 46 on Tuesday, received the machine gun as a birthday gift from the Hezbollah command.

Kantar, who unveiled he had received several assassination threats from Israel, stressed that he does not fear for his life, adding he won't give in easily to the Zionist enemy.

"I am taking extra precautions because I do not want to give my martyrdom to the Israelis easily," he said.

Abey residents said since Kantar's arrival, Israeli warplanes have been hovering over the town daiy. But the threats and the planes, did not bother Kantar, who has vowed to put the 30 years he spent in an Israeli jail behind him, and instead focus on the continued armed resistance against the Zionist regime.

He strssed that his praise for Hezbollah was not only because it had secured his release, but because the movement has proven to be the most effective resistance against Israel.

Besides his focus on Hezbollah, Kantar was working on reintegrating into family life, by spending time talking to his nephews and nieces, who keep asking him questions about his days in the prison.

"They ask me questions how I was tortured and how I managed to take a BA in sociology inside the jail," Kantar said. [...]

Is that all one subject?

Update: I may not have received the machine gun of the resistance for my birthday, but I was included in the latest Carnival of Satire. If you like satire, you should check it out.