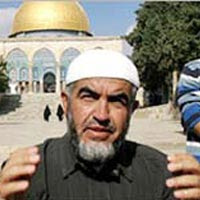 There is a very long tradition of agitation against the Jews involving the idea of schemes to destroy the Al-Asqa mosque.

Sheikh Raed Salah, head of the Islamic movement inside the occupied territories in 1948, said that the coming days will witness a very serious attempts to launch attacks affecting Al Aqsa mosque in direct way.

Sheikh Salah said that the city of Jerusalem is exposing to judaize continuously through a Zionist gradually scheme. He emphasized that the occupation authorities were still demolishing part of the Al Aqsa Mosque. He considered that this crime is just the beginning of the serious crimes.

Sheikh Raed Salah, declared that there is a new Zionist scheme to start new demolitions and new drillings near the Al Aqsa Mosque in the few coming days. He mentioned that the drilling will be in "Al Buraq" plaza under its ground.

Sheikh Salah said: "The occupation authorities conditioned on the contractors that Applicants for the tender must have a previous experience in the demolition works in sensitive areas. And the contractor has small trucks could enter the area of "Al Buraq" Wall. The Zionist authorities stipulated that the demolition works begin at the night and end at the morning. All of these actions are executed under full supervision of the Zionist security institution.

He added: "The document revealed the new Zionist scheme, it said that they will remove a very large quantities of stones and soil. According to this document, the stones and the soil will be transported to places under the control of the Zionist security. He said: "That process will be wider and deeper than the demolition works currently happening under Al Magharba gate, which began on February 6th, 2007, today they are preparing to implement a new destructive steps against Al Aqsa Mosque.[...]