Al Qassam Brigades Information Office: "Abu Obaiada: The Zionist entity have to forget Shalit for ever" 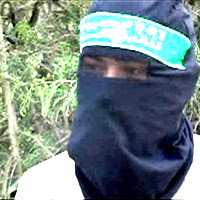 The British University and College Union just voted to boycott Israel, thereby expressing solidarity with the Palestinians. Let's hear from the party the Palestinians elected to lead them, shall we? The interviewee is Hamas spokesman Abu Obaiada (or Obaida):

The politicians in the Zionist entity have plans to execute more bloody operations against the brigades and Hamas, what can you say about that?

Theses Zionist decisions are clearly failed. The Zionist forces in the last weeks executed its air strikes against civilian sites or internal security devices like the executive force. The Zionist entity is flopping. He has nothing to do in Gaza and he has to give up. The Zionist forces failed in Gaza before. We will respond to any aggression not with just the rocks but with every available mean.

What do you think about targeting the executive force sites?

It natural for us to be targeted by the Zionist forces. Because we present the head of the resistance in the Palestinian lands. This caused a panic for the Zionist state. In the issue of the executive force, it is the only Palestinian police force formed by Palestinian agenda. It is not applied Zionist agenda so it will be targeted and that consider as an honor to its members.

What if the Zionist entity executed its threatens and assassinated your leaders, How your response will be look like?

surly the Zionist army may committed crimes against our leaders. But note that when the resistance was in its beginnings, it was a real threat on the Zionist entity. We will use the martyrdom operations, rockets, and may something's you will hear it soon. We stressed that these assassinations will increase the ability of survive to the Palestinian people and Hamas.

Abu Obiada direct message to the Zionist entity have to forget Shalit for ever if it assassinated one Hamas leaders. But the surprise was that he said "May be before Shalit released, some of his friends will be with him".

Do you have the intention to improve your resistance means?

We are working to improve our resistance means as we promised our people. The Zionist sanction to the Palestinian people give us strong that our method is right. And our rockets will be more accurate and more influencing.

What about the martyrdom operations in the occupation land in 1948?

I assume that means "Hell, yeah!"

Recently you talked about improving Qassam rockets and you said that it’s a matter of time that the will reach Asqlan, Do you have rockets reach to Asqlan?

In this issue, we said about reaching the rockets to Asqlan that it’s a matter of time. And we are working to develop our resistance techniques and means.

What is your message to the Zionist entity?

Your leadership is don’t know what it is doing. Destroying the rockets, building, and even the leaders martyrdom didn’t make us retreat. It will give us more strength and power to continue our struggle against the Zionist entity and protect the Palestinian people.

"Your leadership is don’t know what it is doing." That's eminently quotable.