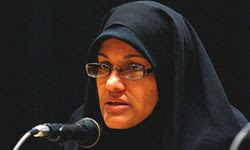 The "Zionist Lobbies" are probably also to blame for making Ahmadinejad short:

An Iranian lawmaker voiced parliament's support for President Mahmoud Ahmadinejad's visit to the Persian Gulf island of Abu Musa, and added that the Emiratis' remarks against the visit came under the influence of the Zionist lobbies.

After President Ahmadinejad visited Abu Musa earlier this week, the United Arab Emirates (UAE) recalled its ambassador from Tehran Saif Mohammed Abid al-Zaabi in protest at Ahmadinejad's official trip to the Iranian island, alleging that the island is part of its territories.

Speaking to FNA, member of the parliament's National Security and Foreign Policy Commission Zohreh Elahian noted that such remarks will not undermine Iran's sovereignty over the Persian Gulf Island.

"Such claims by the UAE and the Persian Gulf littoral Arab states have been made under the Zionist lobby and the Zionist regime is seeking to sow discord among the Persian Gulf littoral states as part of its Iranophobia project, and this project has now surfaced in the baseless and unfounded claims raised by the Arab states regarding Iran's sovereignty over the three Islands," he noted.

International documents clearly show that the three islands of the Greater Tunb, the Lesser Tunb and Abu Musa which were historically owned by Iran, temporarily fell to British control in 1903. The islands were returned to Iran based on an agreement in 1971 before the UAE was born.

Iran has repeatedly declared that its ownership of the three islands is unquestionable.

Under international law, no state can defy any agreements, which came into being before its establishment.

Yet, the UAE continues to make territorial claims against the Islamic Republic despite historical evidence and international regulations.

I included the picture because the article seems to be confused about Ms. Elahian's gender.
Posted by Yitzchak Goodman at 10:07 AM