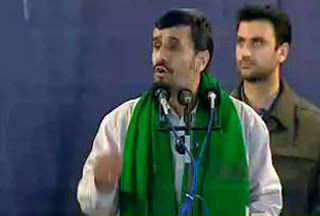 The kippah-effect is just a trick of the light, I guess. Anyway, I particularly savor articles about Mahmoud's goofy, ill-fated economic plans:

President Mahmoud Ahmadinejad says implementation of the "targeted subsidy system" will eradicate unemployment and poverty within three years in Iran.

"Iran is a rich country and if justice is established not even a single person will be unemployed or poor," Ahmadinejad said in his address to people in the southwestern province of Khuzestan on Wednesday.

"I have also assured the parliament members that if the plan is implemented by a smooth mechanism, Iran will not have even a single jobless or poor within three years," Mehr news agency quoted Ahmadinejad as saying.

Iran's Guardian Council has approved the legislation aimed at gradually cutting the government's subsidies on energy and food items.

The body's spokesman Abbas-Ali Kadkhodaei said on Wednesday that the bill complies with Islamic laws and the Iranian Constitution.

Iran's Parliament (Majlis) ratified the bill proposed by the government after making some amendments to it.

The 'Economic Reform Plan' will allow the government to establish an organization to enforce the plan.

Addressing a group of people in Ahwaz, southwest Iran, President Ahmadinejad spoke of three main features that make Middle East a key point in the world.

"The Middle East has always been the birthplace of civilization, culture, and thought. All messengers of God have come from the area. Second is that our region is the world's main energy resource. Whoever wants to control energy supplies in the world should have dominance in the Middle East," President Ahmadinejad said. [...]

"For hundreds of years the western powers have sought dominance in the Middle East. The very foundation of the Zionist regime was to fulfill this dream," President Ahmadinejad added.

The IRI President asserted that they changed their plans when they couldn't achieve their goals through fraud, and old methods of exploitation.

"Even the September 11 attacks sound very fishy. Many experts believe it was the Zionists and Americans' plot to bring their forces to the region," IRI President added.

"Experts" in what subject? Just wondering. At Fars we learn "Basij Commander Vows to Take Revenge on US over Recent Events":

Commander of Basij (volunteer) forces Brigadier General Mohammad Reza Naqdi on Wednesday warned that Tehran will take revenge on the US for its involvement in the recent events in Iran, including assassination of a renowned nuclear scientist and university professor.

"People are angry at those who staged the scene of recent events and terror attacks, but revenge should be taken from the US itself for these crimes and, God willing, this will happen," Naqdi said, addressing a gathering of Basij commanders here in Tehran. [...]

"...the terror attack against martyr Ali Mohammadi showed that the democrats ruling the White House have reached a dead-end and are staging a scenario which Carter performed 30 years ago," Naqdi said. [...]

You don't suppose they perceive Obama as weak, do you? We conclude with a PressTV headline: "Green sea slug is half animal, half plant." Now why does that story appeal to them? Reminds them of the Khomeinist regime? By the way, some are reporting that Moussad Ali-Mohammad, that assassinated scientist, "had opposition links." The Khomeinist green sea slug strikes!

Crossposted on Soccer Dad
Posted by Yitzchak Goodman at 9:51 PM