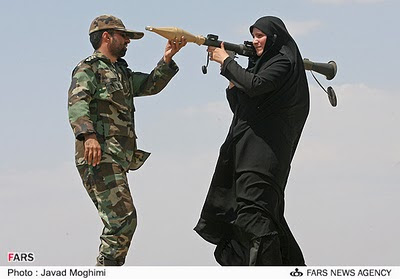 IRIB Radio always gives Ahmadinejad the title "Dr." He has a doctorate in blather, evidently:

President Dr. Mahmoud Ahmadinejad has said that the Iranian women are the flag-bearer of human perfection in the world.

According to IRIB, in an address to conference held to laud Iranian women, on Monday, President Ahmadinejad added that Iranian women are, today, a source of honor for the Iranians and all the freedom-seeking people in the world.

In further remarks, President Ahmadinejad reminded that the capitalist world has trampled upon women’s dignity, and uses women to publicize its products.

President underlined that in the wake of betrayal of women during the era of Marxism and Capitalism, selfishness and expansionism gained power, and individuals emerged that found the murder of human beings as joyous.

President Ahmadinejad added in an opinion poll of married women in a European country, 70% of these women announced that they have been repeatedly battered by their husbands, but remain silent to maintain the foundation of their families.

Moreover, President Ahmadinejad underscored that a community, in which women do not have a sense of identity and do not maintain a historical mission and perfection, is dead and will never experience the essence of prosperity.

Posted by Yitzchak Goodman at 8:58 PM

Many thanks very much regarding revealing this unique details. I would undoubtedly like.
Cheap Diablo 3 Items
Cheap D3 Items