Guardian: "Analysis: The latest attacks in Gaza rank with Deir Yassin and the Sabra and Shatila massacres" 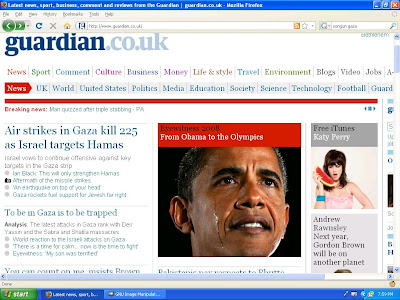 The title of the post quotes the blurb on the Guardian front page (click on the screen-shot for a closer look), which links to the following article:

[...] For in the end what has happened in the past few hours is simply an expression of what has been going on for days and months and years: the death and fear that Gaza's gunmen and rocket teams and bombers have inflicted upon Israel have been returned 10, 20, 30 times over once again. And nothing will change in the arithmetic of it.

Not in Gaza. But perhaps in a wider Arab world, becoming more uncomfortable by the day about what is happening inside Gaza, something is changing. And Israel has supplied a rallying point. Something tangible and brutal that gives the critics of its actions in Gaza – who say it has a policy of collective punishment backed by disproportionate and excessive force – something to focus on.

Something to be ranked with Deir Yassin. With the Sabra and Shatila massacres. Something, at last, that Israel's foes can say looks like an atrocity.

The author puts the comparison into the mouth of the "Arab World," but he means it himself. Deir Yassin was followed, perhaps revenged, within days by the much less well-known Hadassah Hospital Convoy Massacre. Sabra and Shatilla was carried out by Arabs. The AP, in reference to the current Gaza operation, states "Most of the casualties were security forces . . . " 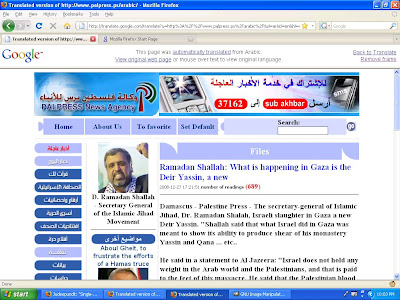 Posted by Yitzchak Goodman at 7:48 PM