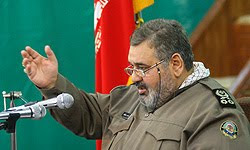 The picture nicely compliments the title, don't you think? Anyway, whatever Obama's Iran-strategy is, I don't think it's working:

A senior Iranian military commander downplayed recent speculations about a possible US attack on Iran, and said that Iranian forces have long been waiting to destroy the US forces and equipments in the region.

"First we should wait and see whether they (enemies) are able to take such a move (attack on Iran) or not since we have been prepared to destroy the US forces and equipments in the region for the last 10 years," Iran's Armed Forces Chief of Staff Major General Hassan Firouzabadi told reporters on the sidelines of an international conference on nuclear disarmament here in Tehran on Saturday.

"As I have already announced, if the US attacks Iran, none of its soldiers will go back home alive," the commander went on saying.

Firouzabadi also said that such war rhetoric by the US indicates that Washington is unable to confront the nations' vigilance and their movement towards restoration of their rights and spread of justice throughout the world.

The remarks by the Iranian General followed a US nuclear threat against Iran. The United States pledged never to use nuclear weapons against the states that comply with the Non-Proliferation Treaties (NPT) as part of a much-anticipated review of nuclear arms strategy released last week.

But the new pledge leaves open a nuclear strike against countries that have signed on to a global NPT but stand accused of violating its terms.

Obama, in an interview with the New York Times, said outright that the loophole would apply to "outliers like Iran and North Korea" that the US believes are developing nuclear weapons.

Obama's statements seems to directly inspire much of Iran's anti-US propaganda. When he made his remark about not "meddling" in Iran's affairs, the word "meddling" became the constant refrain of Iranian official statements.

Crossposted on Soccer Dad
Posted by Yitzchak Goodman at 8:42 PM