Fars: "Basically, BBC is not a media, rather it is an organization in disguise which has a Baha'i-Zionist nature with political-intelligence missions" 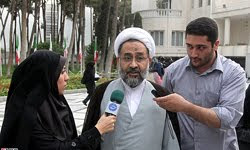 Detention of the members of a covert network who wired information to the British intelligence agency (MI6) under the cover of reporting for the British Broadcasting Corporation was the beginning of the country's clampdown on the BBC intelligence network, Iranian Intelligence Minister Heidar Moslehi announced on Sunday.

"We have made the least detentions, but these measures mark the beginning of our actions in this regard and we carry out our duty very decisively whenever necessary," Moslehi told reporters.

He stressed that Iran had on several occasions announced that cooperation with the BBC has been banned to safeguard the country's national interests.

Moslehi said, "Basically, BBC is not a media, rather it is an organization in disguise which has a Baha'i-Zionist nature with political-intelligence missions."

Moslehi reminded the BBC's key role in the 2009 post-election unrests in Iran, and said the British broadcaster is a conglomerate of different antirevolutionary elements which carry out the most inimical acts against the country.

The Iranian intelligence ministry earlier this month confirmed that its forces have arrested members of a covert network who wired information to the BBC, accusing them of providing logistic support for enemies' soft war experts.

If that isn't a good description of the BBC's function, I don't know what is.

The Public Relations Office of the intelligence ministry said in a statement that the individuals were arrested after continued monitoring and controlling measures and massive intelligence gathering inside and outside the country by Iran's intelligence forces in the past few months.

The statement added that members of the secret network, some of whom have been arrested during the past few days, were collaborating with the BBC in a cover-up to fulfill the needs of the British secret service in exchange for big sums of money.

The ministry announced that investigations into the case and search for the remaining members of the network are underway, adding that it would release more information on the latest developments in the case in the near future.

This is not the first time that Iran is in raw with BBC over the fake reports about social and political realities in Iran.

Following broadcast of fake news and change of realities on Iran's 10th presidential elections by the BBC, the Press Bureau of the Iranian Culture Ministry issued a statement to expel the BBC correspondent.

"In view of the function and performance of the BBC in distorting and changing realities on Iran's elections, Jon Leyne, the permanent correspondent of the network was expelled," the statement said at the time.

Meantime, the statement blamed the BBC reporter for encouraging unrests in Iran and destroying the private properties and public amenities during the days after the election through media tactics and psychological warfare.

If Fars News is any indication, the psy-ops were wildly successful. I don't think there is a functioning brain left in the organization.
Posted by Yitzchak Goodman at 4:51 PM