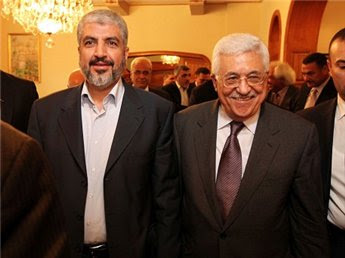 According to Maan News:

President Mahmoud Abbas and Hamas leader Khalid Mashaal on Thursday said they had resolved all their differences, after a meeting in Cairo to implement a unity agreement.

"We want to assure our people and the Arab and Islamic world that we have turned a major new and real page in partnership on everything do to with the Palestinian nation," Mashaal said.

"There are no more differences between us now," added Abbas, who heads the Fatah movement.

According to an AP headline, however, "Palestinian rivals talk, but fail to resolve rifts":

Rival Palestinian leaders on Thursday held their first detailed talks on reconciliation since the Islamic militant Hamas seized control of the Gaza Strip more than four years ago, declaring they made progress toward sharing power but failing to resolve key issues.

Western-backed Palestinian President Mahmoud Abbas and Hamas chief Khaled Mashaal talked for two hours in Cairo but did not reach agreement on touchy matters like the composition of an interim unity government and a date for elections.

The meeting raised new questions about whether the rivals are serious about sharing power, or just going through the motions. [...]

Is that clear?
Posted by Yitzchak Goodman at 1:13 PM