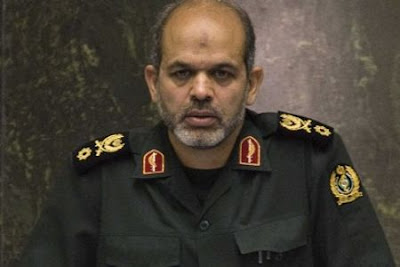 Vahidi has a sort-of Klingon look, doesn't he?

Vahidi said on Sunday that Israel will not have a minimal chance of survival after venturing a military attack against Iran, as Iranian armed forces will pound all of Israel with thousands of missiles, Fars News Agency reported.

“The enemy must answer this question, if it attacks Iran, for how long a battle and losing how many of its warships and vessels has it prepared itself?”

He advised the US and its allies to realize Iran's incredible might and know that in the event of a war the Islamic Republic will teach the Americans what war really is and what soldiers are supposed to be like.

Vahidi said Iranian armed forces will not hesitate to defend the country's sovereignty, adding that if the Zionist regime decides to carry out its threats against Iran, Basij forces will take out revenge [on the entity] for years of [the entity] bullying oppressed nations." [...]

That was "the entity" that did all that bullying? Thanks for the clarification.
Posted by Yitzchak Goodman at 6:34 PM