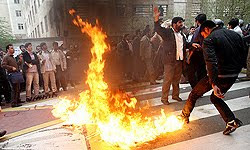 Fars has 6 or so articles at the moment about the embassy storming. Here is most of the first:

Hundreds of Iranian university students started a rally in front of the British embassy in Tehran Tuesday afternoon to shout protest against London's hostile policies against Iran.

"Down with Britain", "Down with America", "Down with Israel" and "Students are Awake and Hate Britain" are among the slogans chanted by the protestors.

The rally comes as Iran is commemorating the first martyrdom anniversary of its nuclear scientist Majid Shahriari who was assassinated by the Israeli Mossad agency supported by the British MI6.

Protesters are demanding a full cut of ties with Britain.

The Guardian Council - a powerful vetting body tasked with studying parliament approvals to make sure they are not against Islamic rules and the Constitution - announced its approval over the parliament ratification yesterday.

As the parliament approval calls for downgrading ambassadorial ties with Britain to the level of charge d'affaires, Tehran is now preparing to expel the British Ambassador to Iran Dominick Chilcott. [...]

The Iranian Law Enforcement Police rescued 6 British staff members in the Qolhak Garden in Northern Tehran, after the protesters raided the orchid and started a sit-in.

FNA dispatches said police could repel the protesters and free the 6 staff members who were surrounded by the protesting students.

Our dispatches also said that students are forced by the police to leave the orchid. [...]

Tehran's Law Enforcement Police clashed with protesters and dispersed them with tear gas.

Our evening dispatches from the scene of protests in front of the British embassy compound in Central Tehran said police clashed with the protesting students who occupied the embassy building.

A number of protesters have been wounded during the clashes while police troops are exerting power to force them out of the embassy compound.

One of wounded protesters is reportedly in critical health conditions.

FNA dispatches also said that a number of the police troopers have been injured in the clashes. [...]

So maybe it was an actual spontaneous demonstration after all? Or a government-sponsored one that got out of hand? Or the whole thing is totally choreographed and they thought a police-student clash with injuries added corroborative verisimilitude to an otherwise bald and unconvincing narrative? Don't ask me.
Posted by Yitzchak Goodman at 8:23 AM