IRIB: "Myth of Holocaust will not survive" 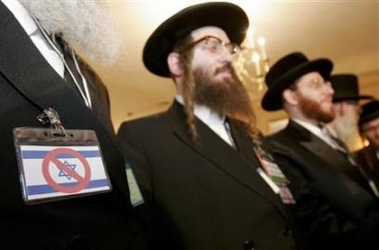 Of course, they weren't seeking this sort of conclusion. They just wanted to create a setting for scientific study. And as the images accompanying these stories never stop reminding us, the Neturei Karta are there giving their imprimatur to the whole business:

French historian and professor of Sorbonne University Robert Faurisson said that the 'myth of Holocaust' fabricated by the Zionists would not survive.

Addressing the International Confernce on 'World Vision on Holocaust', Faurisson said that the gas chambers allegedly used by Hitler to massacre the Jews did never exist.

He said that the Palestinian people have fallen victim to this false story, adding, "If you have evidences to prove Holoucast, please show them to us. Please take us to the gas chambers you say the Nazis used to kill the Jews." "I declare that the chimney you claim Hitler had built to burn the Jews is a sheer lie. You have documentated your allegations on baseless evidences," the French historian said.

He reaffirmed his strong objection to violence and massacre of human beings and said, "When you accuse somebody of a crime, you should present evidences to prove your allegation. I did never see a document to prove Holocaust except for false evidences."

The French historian said that Ahmadinejad has stood up to the big powers' interventionist approach and said 'no' to them.