Ahmadinejad: “The uncivilized Zionists . . . have crushed and are crushing all humans" 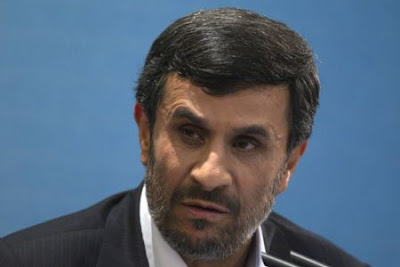 Now that humanity has been crushed, I guess we'll have to pick on Mars next:

Iranian President Mahmoud Ahmadinejad has lashed out at the United States and Israel as the root cause of problems plaguing the human community.

“The most problems humanity suffers from are the result of the expansionist and non-divine rule of the United States and its evil hanger-on, the Zionist regime [of Israel],” Ahmadinejad said at the opening ceremony of the 28th International Holy Qur'an Competition in Tehran on Wednesday, IRNA reported.

“The uncivilized Zionists, for the sake of their own passions, have crushed and are crushing all humans under their heavy wheels of their egotism, materialism and capitalism,” he added.

The Iranian president referred to the occupation of Palestinian territories by the Israeli army and the deaths of over one million people in the US-led wars in Afghanistan and Iraq as further proof that Washington and its Middle East ally have sacrificed all human virtues to reach their colonial goals.

“Today, when there is a crime, corruption or dictator, wherever there is humiliation of humans -- when we pursue we come across the Zionist regime or the US or their allies,” Ahmadinejad pointed out.

“They know no boundary for stuffing their bottomless pockets,” he added. [...]

When the subject is the Zionist entity or the Big Satan, Ahmadinejad can bloviate all he wants. On other topics, he "vows to keep silent":

Iran's President Mahmoud Ahmadinejad says he will not respond to accusations leveled against his cabinet, stressing that the government will continue to cooperate with the Parliament (Majlis). [...]

With regards to the recent arrests, Ahmadinejad said that many charges have been brought against these individuals but “there were some problems with these arrests that I have informed the Judiciary Chief [Ayatollah Sadeq Amoli Larijani] about.”

“Recently they have raised new issues, but our position is silence, but if they want to accuse my colleagues, it will be my legal, national and moral duty to stand up and defend my colleagues in the Cabinet.”

The Iranian president said “such moves and pressure will definitely harm the country,” expressing hope that such behaviors would stop.

“Henceforth, we will continue to maintain our silence but where we see that a great harm will come to the country, I am obliged to tell the people everything… but I hope that things will not come to that.” [...]

Is that clear?
Posted by Yitzchak Goodman at 5:06 PM