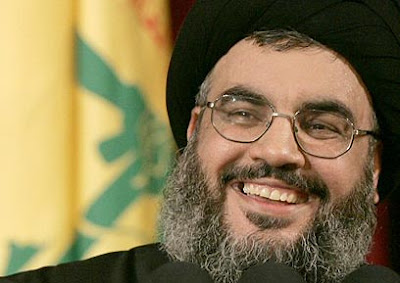 The picture is better than the article:

He made the remarks in Beirut on Wednesday during a ceremony organized by the Iranian Embassy in Lebanon to commemorate the passing of Imam Khomeini, the founder of the Islamic Republic.

“Everyone in the Islamic Republic is accountable before the Judiciary,” Nasrallah said, adding, “The West is trying to portray Iran as an oppressive regime.”

One of Iran's strengths is the fact that it has the velayat-e faqih (rule of the just jurisprudent) system, he stated.

However, immediately after the system was established, enemy propagandists began claiming that it took the country back to medieval times, he added.

Posted by Yitzchak Goodman at 9:50 PM

Nevertheless, immediately after the machine was set up, enemy propagandists started out claiming it required the continent to middle ages, this individual added.