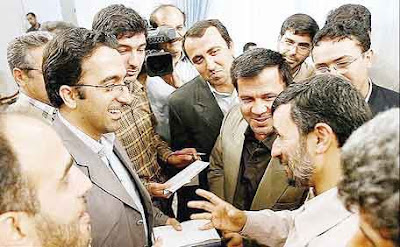 Did I mention that Ahmadinejad has been facing criticism for his economic policies? Never mind--it's all been cleared up! Look at those smiling faces!

Imagine all the journeys to gas stations that can be eliminated!

“We do not agree with selling gasoline in the free market. We believe that gasoline should be imported in the right manner because gasoline accounts for 80 percent of journeys taking place in the country,“ he said.

He pointed out that reducing gasoline consumption can help the government build 1,000 kilometers of railroad annually.

Asked whether he believes his rivals will use the issue of rationing gasoline against him, the chief executive said the people elected him to serve them and he is nobody’s rival.

“Setting free market price for gasoline is harmful to the economy, under the present circumstances,“ he said.

And the Revolutionary Guards will undoubtedly be happy to visit anyone wanting a closer look at where the numbers came from.

He enumerated establishment of gasoline refineries and railroads, strengthening social security insurance and paying financial aid to the unemployed as cases that can be promoted from the gasoline saved.

Commenting on the possibility of holding the second round of Iran-US talks on Iraq, Ahmadinejad pointed out that he will do whatever he can to assist the Iraqi people.

“The notion of justice and strengthening the spirit of serving people depends on the national will and on adopting a national perspective toward the country’s media,“ he said.

Referring to his visit to 29 provinces, Ahmadinejad pointed out that more than 780 sessions were held for provincial tours and a total of 29,000 person-hour of work was accomplished.

In other words, "No unnecessary journeys there!"