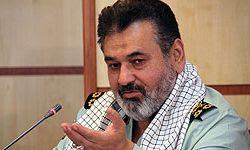 "The West should know that Zionists are behind the so-called religious extremisms and terrorist and racist actions," Firouzabadi said on Saturday, adding that the Zionist regime misuses the world people to materialize its wrong and racist beliefs.

"Since Zionists realized their failure and weakness, they have tried to expand and spread Christian Zionism which is a big danger for the Christian world, and the West as well as the Church should take it seriously," he added. [...]

An article at Fars in which Ahmadinejad "blasted the US and Israel for hatching plots to exercise a compromise plan in the Middle-East" also has a good picture: 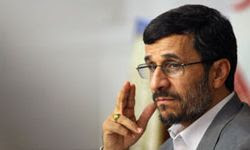 And, of course, the article also has a blog-worthy text, including a dash of 9/11 conspiracism:

Iranian President Mahmoud Ahmadinejad blasted the US and Israel for hatching plots to exercise a compromise plan in the Middle-East, cautioning that Washington is seeking to persuade other countries to recognize the Zionist regime through such plans.

"If we succeed in vanquishing the enemy in its plan for compromise and recognition of the Zionist regime in parts of the Palestinian territories, colonialism will fail forever," Ahmadinejad said on Saturday, adding that "this is a historical battle".

Ahmadinejad had earlier reiterated that Israel is experiencing fragile conditions in the Middle-East region today and it should leave the political scene.

"After the victory of the Islamic Revolution, specially in the last 10 to 15 years, it was revealed that the Zionist regime has become shaky and should go,"
Ahmadinejad said on Monday, addressing people in the Northeastern Golestan province.

He also pointed to the bad political conditions of the world hegemonic powers, and said they resort to every possible means and action to save themselves similar to what they did in 2001 by sponsoring the September 11 attacks. [...]

That sentence was probably the exact moment at which he made that two-fingers-in-in-the-air gesture.
Posted by Yitzchak Goodman at 9:42 PM