Things have gotten quite lively in Syria at the moment. According to an AP headline, "Scores die as Syrian forces attack defiant cities," and according to the Guardian "100 die in crackdown as Assad sends in his tanks." In the meantime Syria's SANA news agency has headlines such as "Interior Ministry: 8 Policemen Martyred during Confrontation with Armed Terrorist Groups in Hama." Let's examine an article about how wonderful Syria's army is in general:

The Syrian Arab Army has always been a national guarantee for all the Syrians who believe in its role in defending the motherland, and its military barracks have became a part and parcel of the Syrian cities and villages as they instill security in the hearts of the citizens and endow them with a sense of pride and strength.

Since its foundation on August 1st in 1945, the Syrian Arab Army has always performed its missions with a high professionalism and responsibility deriving its strength from the popular situation which gave it complete confidence and supported it to be able to stand in face of the enemies and to thwart the conspiracies hatched against Syria.

Syria since the independence has given a pan-Arab dimension for the Syrian Army whose top issue is the Palestinian cause, and it played a heroic role in Lebanon as it became a bastion in face of those who conspire against the Arab nation.

The pan-Arab ideology of the Syrian Army made it participate in the Rescue War in 1948, and it played a significant role in confronting the tripartite aggression against Egypt in 1956, and despite of the attempts to disarm it, the Syrian Army achieved a stunning victory against the Israeli enemy during Tishreen War in 1973 in coordination with the deep-rooted Egyptian Army.

The latest events witnessed in Syria have enhanced the confidence of the Syrian people in their army which protected the citizens and the public and private institutions as it has sacrificed to combat the crime and to confront the conspiracies with the least losses.

Researcher in International and Political Relations, Ma'an al-Hassan said that there is a national consensus on the role of the Syrian Arab Army as one of the bases of the national unity, adding that there is a belief in its ability to get out of the crisis and to defeat the foreign threats facing the hometown under the slogans of national dignity, hope, and the confidence in liberating the land and protecting the national independence against all the foreign conspiracies.

"Tishreen War"? As in Tishrei? The article is accompanied by heartwarming photos like this one: 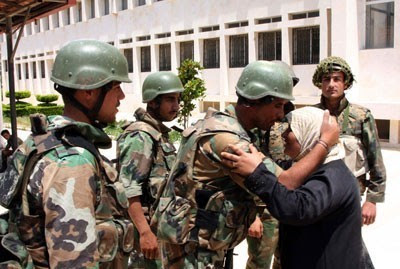