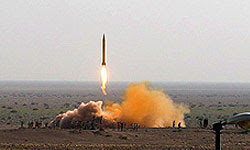 Our favorite Holocaust-denying regime is crowing about further progress in its ongoing arms build-up:

Commander of the Islamic Revolution Guards Corps (IRGC) Aerospace Force Brigadier General Amir Ali Hajizadeh said that the US fleets of warships are no longer a threat to Iran since the IRGC now enjoys the capability to hit all US vessels and bases in the region.

"These vessels (US navy ships) are no longer a threat to us given the (desirable) level of our military capabilities," Hajizadeh told reporters in a press conference on the achievements of the IRGC's recent missile drills, codenamed "Payambar-e Azam (The Great Messenger) 6".

"A large (aircraft) carrier with a length of 330 meters, 7o meters width, 6,000 forces and 70-80 aircraft aboard is an easy target for us, and if they want to threaten us, we will attack them" the commander added, but at the same time underlined that "Iran will never initiate a war".

He also underlined Iran's missile capabilities, and stated that about 70% of the US bases in the region are maximum 300 to 400 kilometers away from Iran, meaning that all of them are within the scope of the IRGC's short and mid-range missiles.

Hajizadeh further stressed that the enemy cannot track or intercept the Iranian anti-ship and anti-vessel missiles since they are supersonic.

"… our coast-to-sea missiles traverse at supersonic speeds, of course this technology is own by a very few number of states," he explained.

According to another Fars headline: "IRGC Succeeds in Hitting Targets in Indian Ocean from Northern Iran":

A senior commander of the Islamic Revolution Guards Corps (IRGC) announced the successful test-firing of Iran's long-range missiles, saying that the IRGC has succeeded in targeting vessels in the Indian Ocean from a location in Iran's Northern province of Semnan.

Speaking to reporters, Commander of the IRGC's Aerospace Force Brigadier General Amir Ali Hajizadeh said that the test of long-range missiles was conducted in February.

"In Bahman of the last (Iranian) year (January 21- February 20) two IRGC long-range missiles with a range of 1,900km were fired from a region in Semnan province at specified targets in the entrance of the Indian Ocean," Hajizadeh announced.

The commander said that the test was conducted at a time when American forces were also present in the region, and added, "Of course, we had declared that we were having drills in the area and we had closed that specific.

"We even allowed the US spy planes to be present in the region, although they never made an announcement about this issue," he continued. [...]

Nice of them. And just as a reminder of the paranoia that accompanies this military build-up, according to another Fars headline, "Arrogant Powers Seeking to Fabricate Islamic Notions":

Iranian Parliament Speaker Ali Larijani on Saturday said arrogant powers are deeply fearful of the spread of Islamic thoughts in the world and are, thus, striving to change the nature Islam and the meaning of Islamic concepts.

"The western intellectuals believe that Islam has influenced the Islamic nations' social and political life and caused independence, honor and Jihadi thoughts in Islamic states," he added.

Larijani underlined that the western countries are seeking to control the spread of Islam through different plots and conspiracies, and mentioned that after the September 11 events they sought to change the nature of religion and religious notions and concepts. [...]

Since the 9-11 incident, Washington and its main allies have sought hard to misrepresent Islam through the fanatic practice and picture of fabricated Islamic notions staged by such CIA-created and CIA-backed terrorist groups as the Al-Qaeda.

And, of course, the guy across the street with the Obama/Biden bumper-sticker believes the same thing. It doesn't look good for the world arrogance . . . (The above photo accompanies the "Indian Ocean" story)
Posted by Yitzchak Goodman at 9:36 PM