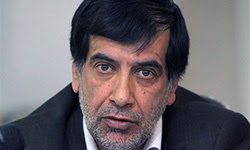 This has to be the scariest stubbly beard guy yet--and Iran has a lot of them.

A senior Iranian legislator reiterated on Wednesday that the domino-like collapse of dictators in the regional countries indicates that the Zionist regime will soon be annihilated.

"With the collapse of every dictatorial regimes and freedom of each Muslim country from the domination of its bullying rulers, the Zionist regime comes one step closer to annihilation," First Vice-Speaker of the parliament Mohammad Reza Bahonar said.

He also urged the worldwide Muslim community as well as all freedom-seeking nations of the world to stage massive participation in the International Quds Day rallies on Friday in support for the Palestinian people and against the occupation and crimes of the Zionist regime.

Millions of people are expected to take part in the International Quds Day (Friday, August 26) rallies in solidarity with the oppressed Palestinian people and all oppressed nations around the world.

The International Quds Day was started by the late Founder of the Islamic Republic, Imam Khomeini, in 1979 as a way of expressing solidarity with the Palestinians and underscoring importance of the holy Quds to Muslims.

International Quds Day is an annual event opposing Israel's occupation of Beitul-Muqaddas. Anti-Zionist rallies and demonstrations are held on the last Friday of Ramadan in Muslim and Arab countries around the world, specially in Iran.

If the reasoning in the title and the first two paragraphs sounds odd to you, remember that in the world of Fars News Iran and Syria are democracies and Mubarak was Israel's best friend.
Posted by Yitzchak Goodman at 10:00 PM