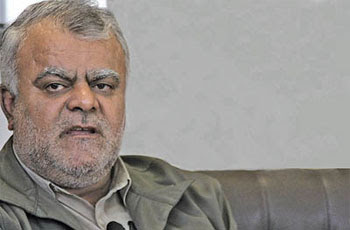 Very suggestive about where the power lies in Iran (and featuring a great picture of one of Iran's many stubbly beard guys!):

"This base (Khatam-ol-Anbiya) should become the replacement for big foreign companies," stated Qasemi, former commander of the base, on Sunday.

He urged the base to expand its role in Iran's economy sector and said it should prepare the ground for the country's private sector on a stage-by-stage process, IRNA reported.

The Oil Minister emphasized that the IRGC's Khatam-ol-Anbiya should give up small and medium works due to the involvement of the private sector in such activities.

The base has gone through a lot of ups and downs but has capable and proficient forces and proper facilities, he opined.

On Wednesday, Qasemi was approved by an overwhelming majority in Iran's Majlis (parliament) as the country's new Oil Minister.

Iran, where majorities are always overwhelming . . .
Posted by Yitzchak Goodman at 10:29 AM