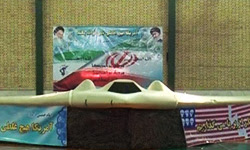 The drone is dominating Iran's news sites at the moment. Here is one particularly gloating example:

US special forces intended to conduct a covert mission inside Iran to retrieve or destroy a very precious stealth drone that was downed by Iran on Sunday, but ultimately gave up the plan for their fear of Iran's tough response, Washington officials revealed on Thursday.

Iran announced on Sunday that its defense forces had downed the aircraft through a sophisticated cyberattack.

The drone is the first such loss by the US.

Initially, officials in Washington didn't believe Iran had detected and downed the drone, but they later admitted that they had lost it. White House officials first alleged that the drone was not anything special and belonged to the ISAF forces in Afghanistan, but later admitted that the unmanned surveillance plane was a stealth aircraft being used for top secret missions by the Central Intelligence Agency (CIA).

The US officials are now trying to convince the world that the aircraft and its systems are not among those technologies which shouldn't have been exposed to Iran, but the western media reported today that the aircraft is so important for the US that they have worked out three operations to retrieve or destroy it.

The RQ-170 has special coatings and a batwing shape designed to help it penetrate other nations' air defenses undetected. The existence of the aircraft, which is made by Lockheed Martin, has been known since 2009, when a model was photographed at the main US airfield in Kandahar, Afghanistan.

US officials unveiled on Thursday that they considered various options for retrieving the RQ-170 Sentinel drone.

US officials considered both sending in a team of American commandos based in Afghanistan as well as using allied agents inside Iran to hunt down the downed aircraft.

However, the officials worried that any option for retrieving or destroying the drone would have risked a tough reaction by Iran.

"No one warmed up to the option of recovering it or destroying it because of the potential it could become a larger incident," the US official said according to Wall Street Journal.

If an assault team entered the country to recover or destroy the drone, the official said, the US "could be accused of an act of war" by the Iranian government.

Meantime, the US media are trying to convince the world that the drone has been badly damaged and is not of much use to Tehran, but Iran on Thursday evening released the first images along with thorough explanations about its systems, specifications and the way it was downed by military forces in Eastern Iran. The images and the footages aired by the Iranian state-run TV showed that the stealth aircraft is almost intact and without any major damage.

The Thursday evening images, footage and explanations are available on FNA website (the footage is, of course, only available on our Persian website).

Iranian officials had earlier informed the media that the craft sustained only minor damage.

US intelligence and military officials declined to comment on the specific mission the drone was flying when it was brought down by Iran.

George Little, the Pentagon press secretary, declined to comment on the discussions over options to recover the drone.

US officials claimed that analyzing the materials that contribute to the craft's stealth qualities wouldn't tell Iranian scientists how to manufacture the necessary coatings, but Iran does not need this information as it manufactured a radar evading spy drone with both surveillance and bombing capabilities almost two years ago.

They have already mastered all technology . . .
Posted by Yitzchak Goodman at 4:11 PM