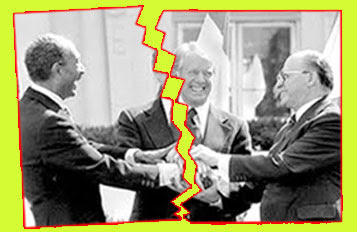 Iran is happy and the image accompanying the article somehow conveys their feelings perfectly. Even we imperialist world-arrogance types can appreciate the fact that the tear goes right through the image of Jimmy Carter:

Egypt's Muslim Brotherhood said that the country's peace treaty with the Zionist regime needs re-evaluation by the country's new parliament, in press remarks by a senior member of the group published Friday.

"A long time has passed since the Camp David accord was signed, and like the other agreements it needs to be reviewed, and this is in the hands of the parliament," said Mahmoud Hussein, the group's secretary-general, according to DPA.

He denied a report saying that the Muslim Brotherhood had reached an understanding with the United States and the Zionist regime on "the importance of safeguarding the peace treaty with Israel." [...]

Posted by Yitzchak Goodman at 1:03 PM