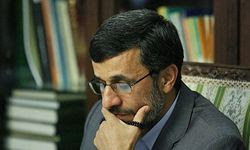 Iran's relationship with North Korea is mentioned less frequently in the Iranian Press than its relationship with other "independent" countries. I was wondering if I was even going to see mention of Kim Jong Il's death. This one even features a picture of Ahmadinejad, not looking too anguished, but maybe pensive:

Iranian President Mahmoud Ahmadinejad in separate messages extended his condolences to the Democratic People's Republic of Korea over the death of the country's former leader Kim Jung Il.

Also in his message, Ahmadinejad wished welfare and success for the Korean nation and government.

Posted by Yitzchak Goodman at 7:40 PM