IRIB Radio is often everything a World Arrogance blogger could want. Ahmadinejad has, we are told, achieved a "landslide victory." Hey, wait a minute, didn't you think the election was close? Here, under the title "Congratulation Messages Pour In," we get a list of "Syrian, Egyptian, Palestinian and Lebanese leaders" that includes terrorist group leaders for three out of five:

They wished him success and prosperity.

Also at IRIB Radio, we get a concise version of the Supreme Leader blather about how wonderful the election was:

The Supreme Leader of Islamic Revolution Ayatollah Seyyed Ali Khamenei has said the talented and great Iranian nation's powerful and calm presence and participation in the epic 10th presidential elections on Friday 12 June was a blessing and mercy from God Almighty, and an unparalleled and unique event in Iran's history. In a message to the Iranian nation on Saturday, the Supreme Leader stressed that the Iranian people's epic participation in Friday's presidential election was a startling and unique event, without precedent, which showed the political awareness and maturity of the Iranian people, their resolute determination as well as revolutionary stance, displaying a wonderful spectacle to the world.

In his message Ayatollah Seyyed Ali Khamenei emphasized that the (democratic) power which the Iranian people displayed with such calm and dignity, and which has now been recorded in Iranian history, is such an extraordinary and important event that conventional words fail to do it justice. [...] 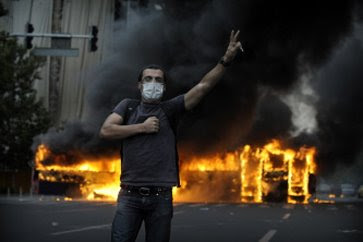 Juan Cole is not buying the election results, but MPAC-UK is:

One thing we can be sure of is that the Zionists must be kicking themselves. Regardless of what excuses anyone makes about "oh, why is the margin so big?" they should understand how democracy works:

I'm not kicking myself. I'm sitting back to watch the fun.

Crossposted on Soccer Dad
Posted by Yitzchak Goodman at 10:01 PM