The usual rhetoric about "foiling enemy plots" and appreciating the Leader's latest remarks in the Iranian press sound a bit desperate these days. Iranian propaganda always sounds exactly like this. It is hard to believe that it only just occurred to the Iranian people to be skeptical about it. Roger Cohen's formulation is "A Supreme Leader Loses His Aura," but perhaps a better way to put it would be "Supreme Leader's Aura becomes unbearably foul" (sub-headlines in the original):

In a letter sent to the Supreme Leader of the Islamic Revolution Ayatollah Seyyed Ali Khamenei on Sunday, members of the parliament expressed their gratitude to the Leader for his "timely and illuminating" remarks at the Friday prayers.

Addressing hundreds of thousands of people at the most recent Friday prayers in Tehran, Ayatollah Khamenei urged all groupings to end their street protests and to pursue their complaints through legal channels.

Ayatollah Khamenei said the time for rivalry is over and everyone should unite behind the president-elect.

The MPs also urged the Guardian Council to accurately examine the complaints about the presidential election results.

The statement denounced the interfering remarks of foreigners about Iran’s internal matters.

GC is doing its duty properly

Ayatollah Mohammad Yazdi, a cleric member of the Guardian Council and Qom Seminary Teachers Society director, stated on Sunday that the council is performing its duties properly.

"Currently, the Interior Ministry has publicized its data and the Guardian Council is properly doing its duties," Yazdi told reporters on Sunday.

Ayatollah Yazdi also asked the candidates to pursue their complaints through legal channels.

"The individuals should pursue their complaints and protests through legal channels. No problem will be resolved by creating chaos and insecurity, and taking to the streets."

"The comprehensive remarks of the Supreme Leader at the Friday prayers in Tehran foiled all of their (enemies’) plots… and clearly showed the way for all groupings," part of the statement said.

Ayatollah Shabestari also urged all candidates and their supporters to follow the Leader’s guidelines.

Gilan Province Governor Rouhallah Qahramani stated on Sunday that the Leader’s guidelines will resolve many of the problems.

"I sincerely extend my gratitude to the Leader of the Islamic Revolution Ayatollah Seyyed Ali Khamenei over his historic and epoch-making presence as well as helpful remarks at Tehran's Friday prayers," the letter read.

It added, "Doubtless you have hoisted the Iranian nation's flag of glory and awareness before the arrogant powers. National accord, unity and esteem, are of paramount significance to national interests ... unconditional exercise of justice, reciprocal nation-government trust and collective determination aimed at resolving obstacles to the country's progress are all public demands that were crystallized in your constructive comments."

The accompanying picture of Ahmadinejad is just as nauseating: 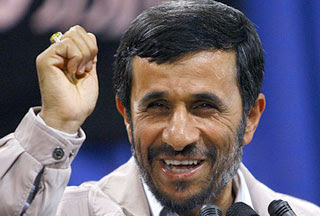 IRIB quotes Majlis Speaker Larijani that a statement on Iran from the U.S. Senate is "disgraceful":

Larijani said the American Senate's move was very disgraceful and had no effect but awareness of the people.

The Iranian top parliamentarian further said the relations of the Iranian people are strong and religion has linked their hearts so that no foreigner and no velvet revolution could break the unity.

The English IRNA and Fars News sites are still unavailable.

Crossposted on Soccer Dad
Posted by Yitzchak Goodman at 11:04 AM