Bolivarian speaks out for Khomeinists

The title of this IRIB Radio article is "Venezuela condemns efforts to destabilize Iran." I wonder what efforts those would be? He can't mean Obama, who has implemented the new Obama Doctrine: Expressions of disapproval are not meddlesome as long as they are halting and awkward. What is "destabilizing" Iran at the moment is that the people are enraged that their votes didn't count for anything and making sure the Mullahs know about their displeasure. So perhaps the title of this article should be "Chavez condemns people of Iran":

The Venezuelan government denounced the efforts and propaganda of some countries to destabilize Islamic Republic of Iran. According to IRIB, Venezuelan Foreign Ministry in a statement released on Tuesday termed Iran as its friend and brother, calling foe the immediate end of theses countries' measures for terrorizing Iran.

The statement said the Venezuelan government also congratulates the Iranian nation on the recent presidential elections which resulted in the victory of the incumbent president, Dr. Mahmoud Ahmadinejad.

Meanwhile IRNA and Fars News have been unavailable for a few days. I thought that perhaps they went down in the general turmoil, but according to current reports, they have been under cyber-attack. PressTV, which was also reported to be under cyber-attack, but which seems to been working most of the time, reports that "Iran warns foreign media over coverage":

Tehran says foreign media outlets are fanning the flames of the post-election unrest with their politically-motivated coverage of Iran's internal affairs.

He urged media outlets to change their outlook towards political developments occurring in Iran.

Qashqavi's remarks came a day after Iran revoked all foreign media accreditations. "No journalist has permission to report, film or take pictures in the city [of Tehran]," the Culture Ministry announced on Tuesday. [...]

Iran's Intelligence Ministry says that it has arrested a number of 'main agents', who masterminded the recent post-election violence in Tehran.

IRIB has an article about a supposedly "amicable" meeting between the Supreme Leader and "Representatives of the four Iranian presidential candidates." The title is "40 million votes cast for Islamic System." I think the voters also had a certain interest in which candidates they were voting for. Here's the picture of the "amicable" meeting: 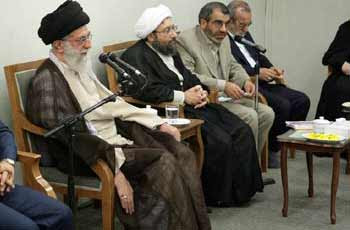 Crossposted on Soccer Dad
Posted by Yitzchak Goodman at 10:02 AM