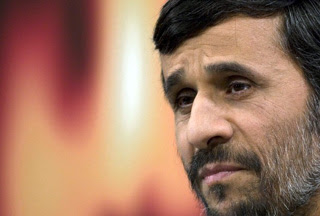 Look at the compassion on that face! His government would never murder Neda, no never--it's all a plot of the World Arrogance:

Iranian President Mahmoud Ahmadinejad has asked the Judiciary chief to conduct a through investigation into the death of Neda Aqa-Soltan, an Iranian woman who was shot dead in Tehran's post-vote protests.

In a letter to Iran's Judiciary chief Ayatollah Mahmoud Hashemi-Shahroudi on Monday, Ahmadinejad called for a serious probe into the "suspicious" death of Neda and recognizing elements behind her killing.

"Neda Aqa-Soltan was shot dead in one of Tehran's streets on June 20 by unknown elements in a completely suspicious way," said the president.

"Amid vast propaganda by foreign media and many other evidence about the heartfelt event, it seems definite that opponents of the Iranian nation interfere (in Iran's internal affairs) for their political misuse," he added.

Neda, 26, became a symbol of post-election street rallies in Iran and an international icon in recent days after graphic videos of her death grabbed the attention of world media outlets.

Her death first became suspicious after revelations that she was killed by a small caliber pistol -- a weapon that is not used by Iranian security forces.

A small caliber pistol! Everybody knows that's a World Arrogance weapon. Will Mahmoud ever look like this again?

Crossposted on Soccer Dad
Posted by Yitzchak Goodman at 9:35 AM