Well, Joe lost control, went into a skid
And gave his life to save that bunch-a kids
And there at that crossroads, was the end of the line
For Big Joe and phantom 309

Sometimes you don't know what you are going to find in the Iranian Press. To be fair, I only quoted part of the headline, which read in full, "Russian scientist: Alien sacrifice saved earth":

A Russian scientist is claiming that aliens downed Tunguska meteorite in 1908, causing a massive explosion in Siberia to protect the earth from destruction.

Dr. Yuriy Lavbin, president of the Tunguska Spatial Phenomenon Foundation, insists that if an alien spacecraft had failed to place itself between our planet and the gigantic meteorite a century ago, the full force of collision above Siberia would have been disastrous.

He provided 10 recovered quartz crystals collected from the crash site as proof. Several of the crystals have holes in between, so they can be united in a chain.

"We don't have any technologies that can print such kind of drawings on crystals," Labvin told the Macedonian International News Agency.

"We also found ferrum silicate that can not be produced anywhere, except in space," added the scientist.

Labvin thinks the marked quartz slabs are remnants of an alien control panel, which fell to the ground after the UFO slammed into the giant rock. [...]

Elsewhere at PressTV we learn that the "World's Strongest Man gives Ahmadinejad a lift":

The strongest weightlifter in history has come out in support of the incumbent President Ahmadinejad in the upcoming elections.

The hugely popular Hossein Rezazadeh, who is the current world record-holder for the heaviest lifts in history, and the head coach of Iran's national weightlifting squad, has declared his support for Ahmadinejad.

“Due to my heartfelt affections for Dr. Ahmadinejad, I am ready to run his campaign's sports outfit as a volunteer, and in some way repay him for all he has done for the (country's) sports,” he told the national Iran TV station yesterday, according to the Tabnak News Agency. [...]

The story is accompanied by a great picture: 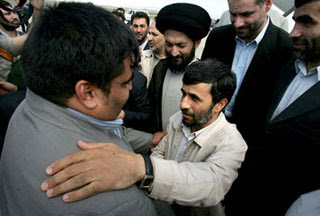 Honey, I shrunk the President! Meanwhile, Fars reports that "Iran Dismisses Reports on Plot for Bombing Israeli Embassy as 'Fake'":

An informed Iranian source denied media reports on an alleged plot by Iran and the Lebanese Hezbollah to bomb Israeli embassy in Azerbaijan, stressing that Tehran would never embark on impairing its good neighborly relations with Baku.

I mean, isn't as if they are Argentina or anything.

An unnamed informed source told the Iranian students news agency on Monday that such news was "fabricated" and "baseless". [...]

Crossposted on Soccer Dad
Posted by Yitzchak Goodman at 5:53 PM