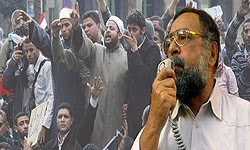 This is an important story. The "Land-for-Peace" concept should be nicely dead by now:

Speaking in an interview with FNA on Tuesday, Hussein announced his candidacy for the upcoming presidential election in Egypt to help establish democracy in his country and materialize people's demands.

The Amal secretary-general further noted his campaign agenda and said if elected as Egypt's president, his working agenda would be in full harmony with people's demands as shouted in the streets of Cairo and other cities in the January 25 revolution.

Hussein said "confrontation against the Zionist plans in occupied Palestine", among others, is his top priority on the scene of foreign policy.

He viewed Egypt's relations with the Zionist regime as detrimental to his country, and said if he is elected president, "Egypt would no more be subordinate or dependent on the Zionist regime the same way that we would support the Palestinian nation until the materialization of their righteous demands".

He said "contents and clauses of the agreements signed between Egypt and Israel will certainly be revised" if he is elected president.

Posted by Yitzchak Goodman at 7:58 AM