It is long for a title, but it makes a useful point for us hasbara-types: "Protest in front of the Israeli embassy in Cairo: send that to Thomas Friedman who does not think that Egyptian youth care about foreign policy and to Nicholas Kristof who thinks that Egyptians heart Camp David"

Here is the IRIB article on the protest:

Fierce clashes have erupted between the Egyptian army and thousands of protesters who gathered outside the Zionist regime's Embassy in the capital Cairo to demand severing of all ties with Tel Aviv.

Over one million Egyptian protesters in Cairo's Liberation Square demanded their military rulers to abandon the Zionist regime and lift the blockade on the besieged Gaza Strip on Friday.

Thousands broke away from the crowd and marched toward the regime's embassy.

Intense confrontations took place in front of the heavily guarded compound as protesters shouted "Bring down the flag, we don't want it," referring to the Zionist regime's flag on top of the regime's Embassy's building.

Protesters vented their rage at Tel Aviv by burning the regime's flag and demanding the liberation of Palestine, and promised to stand by Gazans, who have been suffering the Zionist regime's constant aggression and its four-year long crippling siege.

The recent Zionists' attacks on the Gaza Strip since Thursday, which have caused a total of 18 casualties and dozens of injuries, lit the fuse for the massive demonstration.

The protesters also called for the expulsion of the Israeli ambassador in Egypt.

They don't exactly think of Palestinian interests in terms of land-for-peace, do they? 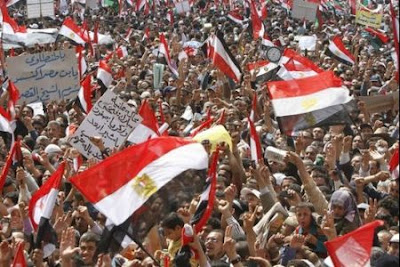 Posted by Yitzchak Goodman at 8:53 PM