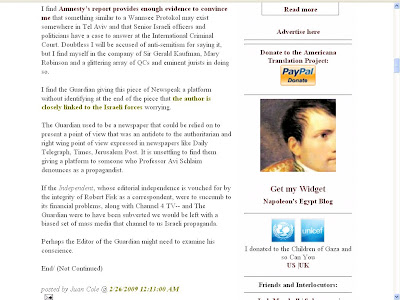 Click image to enlarge
A writer of a "guest op-ed" at Juan Cole's blog, identified only as an "Informed Observer," is indignant that someone actually, horrors, defended Israel in the pages of the sacred Guardian. That would be worth a post in itself. In addition, however, we get speculation that "something similar to a Wannsee Protocol may exist somewhere in Tel Aviv." That refers to a famous document planning the Nazi "final solution" to the Jewish problem. Did he really write that?

[...] I find Amnesty’s report provides enough evidence to convince me that something similar to a Wannsee Protokol may exist somewhere in Tel Aviv and that Senior Israeli officers and politicians have a case to answer at the International Criminal Court. Doubtless I will be accused of anti-semitism for saying it, but I find myself in the company of Sir Gerald Kaufman, Mary Robinson and a glittering array of QCs and eminent jurists in doing so.

I find the Guardian giving this piece of Newspeak a platform without identifying at the end of the piece that the author [Uri Dromi] is closely linked to the Israeli forces worrying.

His name at the beginning of the piece links to a description of his Israeli government and IDF credentials. Perhaps it's a bit much to expect a Guardian reader to navigate a link.

The Guardian used to be a newspaper that could be relied on to present a point of view that was an antidote to the authoritarian and right wing point of view expressed in newspapers like Daily Telegraph, Times, Jerusalem Post. It is unsettling to find them giving a platform to someone who Professor Avi Schlaim denounces as a propagandist.

If the Independent, whose editorial independence is vouched for by the integrity of Robert Fisk as a correspondent, were to succumb to its financial problems, along with Channel 4 TV-- and The Guardian were to have been subverted we would be left with a biased set of mass media that channel to us Israeli propaganda.

The horror! But Fisk would still find somewhere to publish, wouldn't he?

Perhaps the Editor of the Guardian might need to examine his conscience.

Thinking that there might be something to be said for the Israeli side of things--that has to bother the Guardianista conscience indeed! In the comments section, "Georgina Henry Executive editor, comment, The Guardian" explains:

It appeared in the Comment Is Free section of our website (not the print edition) where writers express a wide range of opinions which are exposed to scrutiny by readers who can then comment on them.

See there? There had to be an explanation!

Update: Yaacov Lozowick answers some of the "Informed Observer's" points about specific uses of weapons and also makes a great point about logic and reality.
Posted by Yitzchak Goodman at 10:03 PM